Was the Mark 1 TS image – a presumed heat scorch – relaunched at Lirey as a notional sweat imprint? 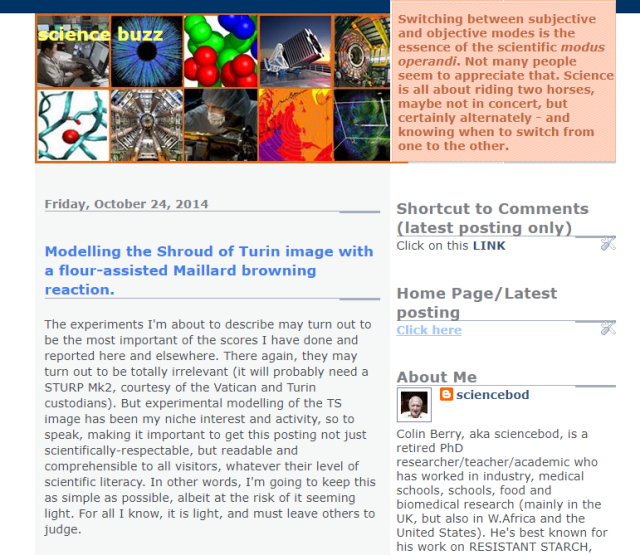 Three or four otherwise peculiar facets of the TS story have been causally related and explained by supposing that the TS started as a thermal imprint , i.e. heat scorch, on linen,  probably of a roasted (not crucified) man, either a Templar, or the martyred St.Lawrence, or maybe a composite of the two.

However the resemblance of that image to a crucified Jesus, supposedly  captured by some obscure means unknown to science post-crucifixion in the tomb, and the marketing opportunities it offered in a relic-fixated age (later augmented with addition of carefully applied blood) proved too strong a temptation for its Lirey custodians to resist,  given the prospects of rich financial rewards.

All that was required was to lessen the intensity difference between image and background so as to be able to claim the image was an ancient (1300 year old)  sweat imprint, similar to that claimed for the then fabled Veil of Veronica.

The post-production changes needed to make the image less intense, and the background more aged-looking, might well account for the  early 16th century and somewhat bizarre account of the Shroud authenticity from one Count Antoine de Lalaing (1480-1640) having been  “tested” by extreme means, including “boiling in oil”.

It also accounts for the addition of the inset image of Jesus and the word SUAIRE below it to the Machy mould, presumed to be the master for the Lirey Badge Mk2, “suaire”  meaning “sweat”, not “shroud” as often assumed on no good semantic or etymological grounds.

It also accounts for the Church being forced to act against the Lirey exhibitions of the “true Shroud”, considering the Mk2 Lirey badge being a step too far.

1. Artificial ageing of the linen would also explain why the latter  seemed older than it really was, based on  Rogers’ “vanillin” test (more accurately described as an undegraded lignin test in my view), and in Fanti’s tests of fibre strength.

2. Artificical ageing might explain the discrepancy re uv fluorescence that is cited as evidence against the TS being a scorch (the edges of the 1532 burn marks fluoresce while the body image does not. The image was subjected to artificial ageing, the later 1532 burn marks were not. The ageing treatment, whatever it was, may have removed or otherwise destroyed the molecules responsible for fluorescence.

Titles can be so tricky – like deciding which words to include, that adequately describe the “product” on offer – and which to leave out so as not to get bogged down with a surplus of detail.

This posting follows a trail established in the immediately preceding ones that began with the realization that “suaire”, as in Suaire de Turin, and that added “SUAIRE” lettering on the presumed Mark 2 Lirey badge (cast from the Machy Mould) did NOT mean “shroud”, as we are often led to believe, but “sweat” or “sweat/face cloth”, as in the “Suaire d’Oviedo”.

The gospel according to the Lirey Shroud custodians: contact print  photography, correction, chemography, 1st century style, with a full length version (front and back) to follow?

In other words, the Lirey custodians in the mid 14th century (Geoffroi de Charny and his soon-to-be widowed wife, Jeanne de Vergey, both of whose coats of arms appear on the Mark 1 and Mark 2 Lirey badges wanted visitors to think of the Shroud as a larger version of the Veil of Veronica (rather than the  bloodied Suaire d’Oviedo) the one that according to legend had been used by Veronica to wipe the face of Jesus while carrying his cross en route to Calvary (not to be confused with the Oviedo cloth that is conjectured to have been used to cover the face at or shortly after death on the cross). Yes. complicated isn’t it? I envy the ability of writers like Ian Wilson to explain the detail while holding the reader’s attention. But then, what do we biochemists know about writing, or even history for that matter? In my case, not a lot, but there are still these tangible artefacts like badges and moulds, and the Shroud itself, that carry curious details and anomalies too – the latter I suspect being too quickly explained away in some instances as part of preconceived narratives. My only narrative or agenda is to seek an explanation for the TS that fits with the radiocarbon dating,  and with such titbits of information that are available from the documentary or physical evidence.

So the title flags up the direction that today’s post will be taking. All that remains is to add some content. That will come spasmodically as  instalments throughout the day.  Hopefully, it will be easier to read than this turgid preamble.

Yup, I warned a few days ago that this blog is now being used essentially as a worksheet. That was the rationale of this blog at the outset, over 2 years ago – to write up a scientific investigation in real time, essentially as a stream of consciousness, warts an’ all. If I have the good fortune finally to arrive at a correct answer, then my new grandchildren, if so inclined, will be able to see how it was done, patiently and I hope, reasonably systematically, taking one small step at a time, and never straying far from the empirical evidence. Nope, it’s not the stuff of click-baiting newspaper headlines that are generated by pseudoscientists and the publicity machines that promote them.

Back later (after breakfast).

(Recent barrage of comments? Nope, I shan’t be returning to that Joel A. thread on the Washington Post.  I heartily disapprove of MSM forum cliquishness, the kind that subverts a site from discussing the journalist’s chosen topic to that of  24/7 chatroom).