Guest posting from Hugh Farey (yipee – another science bod!): here’s a snapshot of his current studies of scorching and uv fluorescence.

One does not have to be acquainted with  “Shroudology” for very long to pick up the received ‘doctrines’ (I hesitate to call it received wisdom).  Prominent among those doctrines is the mantra that the Shroud image can’t possibly be a thermal imprint (“scorch”) from a hot template. Why not?  Because the 1532 burn holes with their scorched margins fluoresce under uv light – a red colour we are told – whereas the Shroud image is ‘non-fluorescent’. What’s more, the entire fabric of the Shroud shows a weak fluorescence that is quenched in the regions where there is body image. Ipso facto, the Shroud’s body image cannot be a thermal imprint. Move along folks, nothing to see here.

Some of you may be familiar with physics-trained Hugh Farey, who has been doing experiments recently with scorching of linen, and use of an ultraviolet lamp to check changes in fluorescence that may or may not accompany scorching from hot metal.

Yesterday he kindly sent me photographs of some of his current experiments. In the next day or two I will display his photographs here, together with his accompanying comments. Any thoughts of my own  regarding Hugh’s findings will appear as comments, provoked or unprovoked by others’ observations and conclusions.

Fig. 1:  Visible scorching versus background fluorescence (left and right respectively). A series of pieces of linen placed one by one on a china plate in an oven for ten minutes, with the oven (and plate) having had time to warm up to the next temperature for ten minutes between each sample. Sample 1. Uncooked! Samples 2 – 8: 180C – 240C in 10C steps. After taking them back to the lab, they were all lightly brushed in one corner with a red hot spatula. The fluorescence due to the spatula iv visible on Samples 1 and 2, but pretty well masked by the rest. 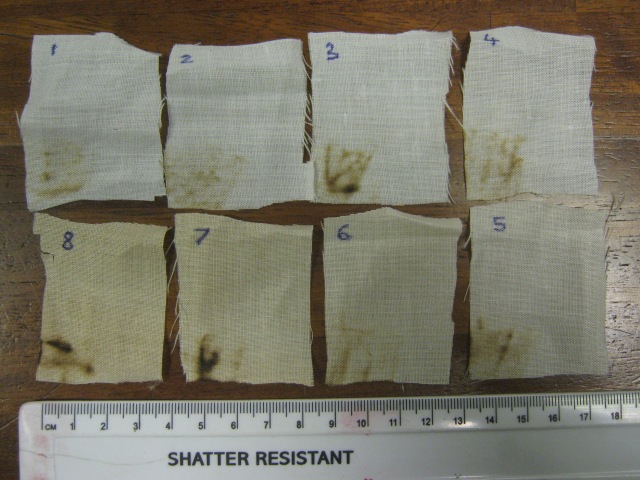 Here’s an ‘enlargement’ of the left hand photograph (well, it’s actually the image file as received, before my misjudged attempt to create a twin-set). 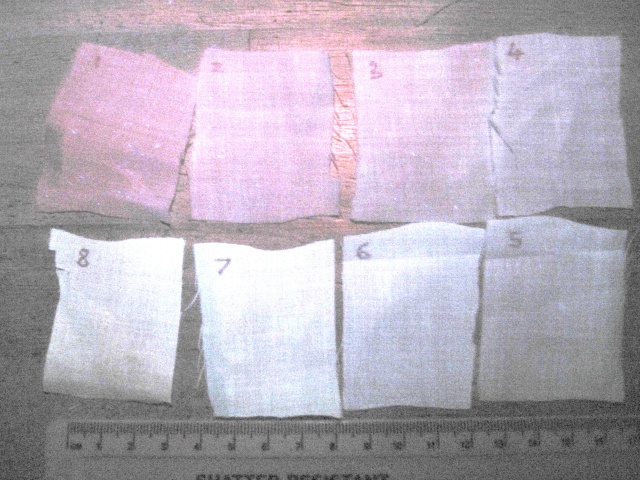 Here’s a better view of the uv fluorescence picture on the right of the ‘twin set’ with some extra contrast and brightness.

Visible scorching vesus uv fluorescence (left  and right respectively). A blob of molten lead was poured onto eight layers of linen and allowed to cool. The UV ‘fringe’ very obvious where the scorch is dark, intruding into the middle as the scorch becomes less visible.

From Hugh:  “I’m sorry if the experiments look as if they were done on a bit of old floorcloth! The stripy patterns, particularly on the visible light photographs, are due to moire interference which is sometimes inevitable when compressing a photo for the web. The cloth is actually an ordinary 1/1 weave. Perhaps I should also say that all the photos were taken without flash, but the UV ones were exposure-enhanced to the maximum allowed in iPhoto.” 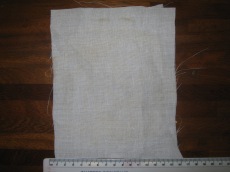 3) My version of your horse brass experiment, but the bas relief placed on a hotplate, the cloth over the top, and then silica sand poured over the top of that to hold it down and fill in the valleys. The first attempt (BasRelief2) is on setting 2 on my hotplate (about 130C).

Sorry, Hugh – your picture transforms to ripples when I upload and insert. Don’t ask me why. 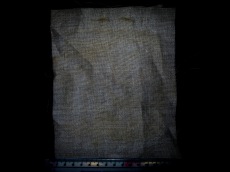 As above, but with added contrast and adjustments to brightness and mid-range values

This was me playing around, Hugh, to show that an image was there, even at 130 degrees C, which could be made visible with extra contrast(see faint yellow- brown) But there’s the same ripple effect. Is it due to having sent a portfolio via email (image compression ?). Maybe try sending one of them single retaining as many of the original’s pixels? 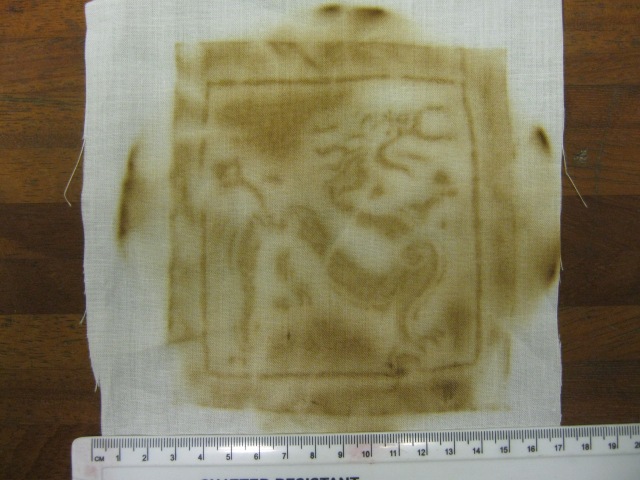 Here’s  the second attempt at setting 4, which is about 250C, but its difficult to measure. (
It looks as if I might have just caught the UV only temperature on BasRelief2, as the visible image is so poor I can’t even tell which way up is it! 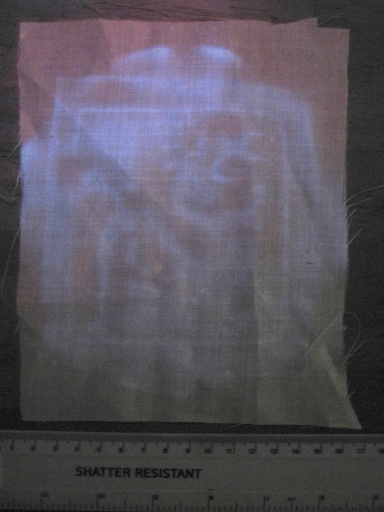 Same as above – but under uv light 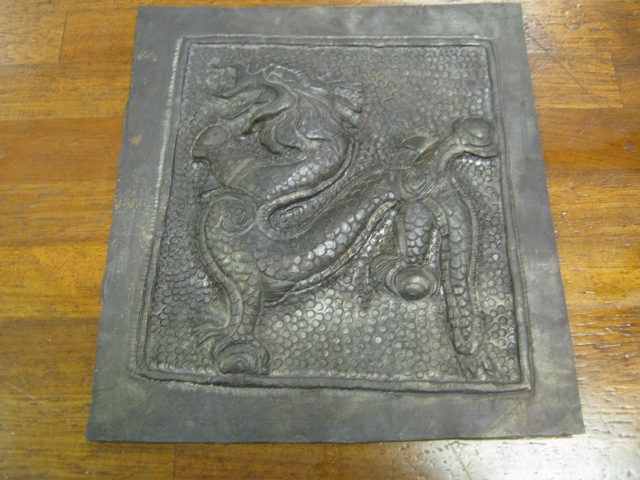 Oh, and here, as an afterthought, is the template from which Hugh’s superb imprints were obtained.

14 Responses to Guest posting from Hugh Farey (yipee – another science bod!): here’s a snapshot of his current studies of scorching and uv fluorescence.