Yet more ‘Fanti-sy’ from Fanti, Faccini et al, this time on the spear so-called “wound”… 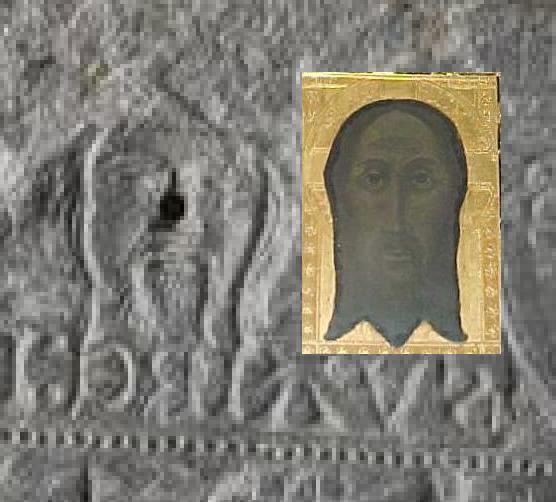 Here is a screen grab from a fairly recent (2008) review by Faccini, Fanti  et al.(pdf), the first two of whom I have strongly criticized previously for making extraordinary unsupported claims re scourge marks on the Shroud. (I’ve since been told  by Giulio on The Other Site to address any complaints to the Journal editor, but being a public domain WYSIWYG retired science bod/blogger – as distinct from olde-worlde wielder of the pen and adhesive postage stamps I have declined to do so)

They claim to be able  to see the spear wound in the side of the Man in the Turin Shroud. Just in case you cannot, they have circled the area in yellow. 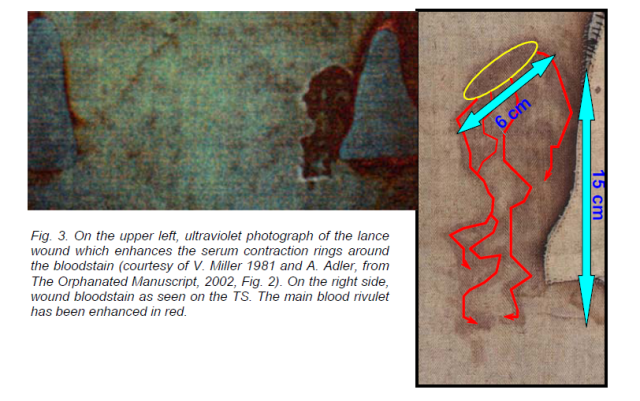 Here’s a close-up of the circled area: 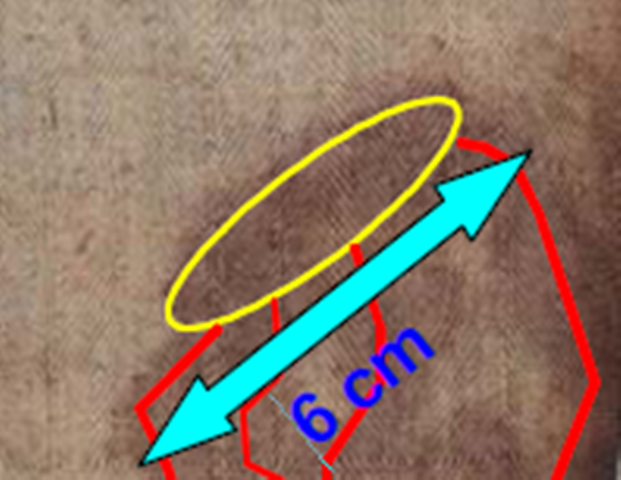 They then go on to say that the blood has flowed in rivulets downwards from the wound (fitting the idea that the Man in the Shroud had been vertical at the time the non-wound was inflicted – you know, like, er, um, being nailed to a cross?).

Here are Shroud Scope images of the same blood area. The first is on plain vanilla Shroud Scope default settings. 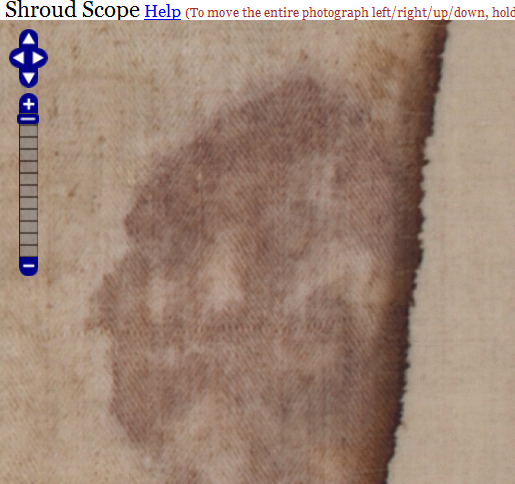 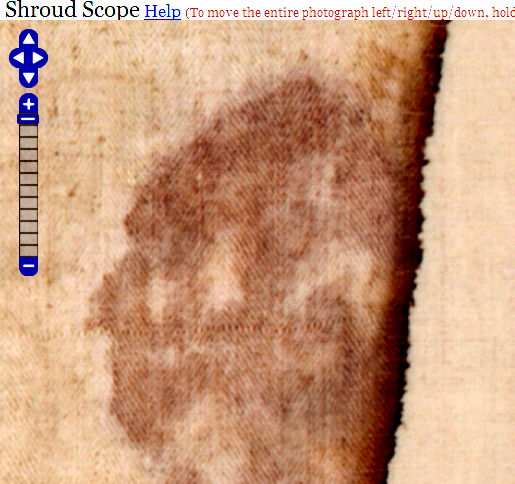 1. There is no spear wound. Circle it in yellow if you wish,  Prof. Fanti et al  but the spear WOUND is entirely a figment of your imagination.

2.  There is nothing to suggest that the blood below the circled area had got where it is by flowing downwards, whether in rivulets or less poetic dribbles. The idea of gravitational flow is also a figment of your imaginations, Prof Fanti et al, as is so much of what you publish.

What we do see on the Shroud Scope images are three distinct colour zones, only two of which can be confidently identified. The first is a thinnish plum-coloured stain that we can call “blood”. The second are yellowish-grey areas which are body image. But there is a third – a red-brown colour – that is superimposed on blood  in some places –but  not all.  I was referring just recently to similar red-brown  patches coincident with plum-coloured blood when discussing bloodstains on the forearm.

So what is responsible for the mysterious red-brown stains? (late ed:  I am ignoring the 1532 scorch here – which I omitted to mention initially)

I have two working hypotheses at present, both of which are linked to my original, somewhat daring (indeed, some might say outlandish)  ‘medicinal leech’ theory. The first is that the leech digesta deposited a variety of substances on the Shroud, only one of which was red blood pigment, the latter in progressive stages of digestion (intact RBC -> haemolysed RBC -> free haemoglobin -> partially to completely digested globin component -> free haem -> iron and free porphyrin). The other(s) could be leech digestive juices, including symbiotic bacteria, anticoagulants etc that congregated into the same or separate areas from the red blood pigments, and which look “red-brown” instead of plum-coloured.

The other hypothesis is that the leech digesta deposit uniformly on the cloth initially , and then the soluble red or plum-coloured pigments (undigested haemoglobin, porphyrins etc) bled through into the linen. The leech digesta initially dried and set solid  to form a kind of hard red-brown skin, or dare one say scab, that could be mistaken for aged blood (which it was, in a sense). With time (decades, centuries) the scab flaked off in some places but not others, exposing the underlying water-soluble plum-coloured blood pigments that have migrated into the weave of the cloth.

So which hypothesis do I prefer? Answer: the second. Why? Because if you look carefully you will see an irregularity in the weave of the linen with a hang-up of red-brown pigment.

Note red-brown pigment lodged in the cavities of the horizontal weave irregularity.

That suggests that maybe the entire stain was red-brown initially, from which the rigid skin then gradually flaked off in places, but tending to get retained in the open box-shaped cavities of the irregular weave.

Takeaway message: there is no spear wound visible on the the  Shroud of Turin. Blood certainly, though not necessarily 100% human blood, and in my opinion, probably painted-on blood, the latter probably from an engorged medicinal leech. But spear WOUND?  NO!   Personally speaking, I consider it totally unscientific to make claims that are not supported by data or other hard evidence, at least in science. I cannot speak for mechanical engineering….

6 Responses to Yet more ‘Fanti-sy’ from Fanti, Faccini et al, this time on the spear so-called “wound”…