Why there is a pressing need for higher definition Shroud images to be placed in the public domain (Barrie Schwortz’s STERA please note).

Mario Latendresse’s Shroud Scope images are fine as far as they go. They retain high definition, aka high-resolution (HD and HR respectively)  up to to their top level of magnification.

But they lose resolution and become pixellated if one tries to magnify further.

Why would one want to magnify further? Answer: to investigate the region between seeing the herringbone weave, with blood image apparently confined to the ribs of the weave, and the individual interwoven fibres. There is a paucity of such images available on the internet – they appear to be in the Mark Evans’ archive held by Barrie Schwortz and his STERA Inc. as recommended to me recently by Dr.Thibault Heimburger.  Example: 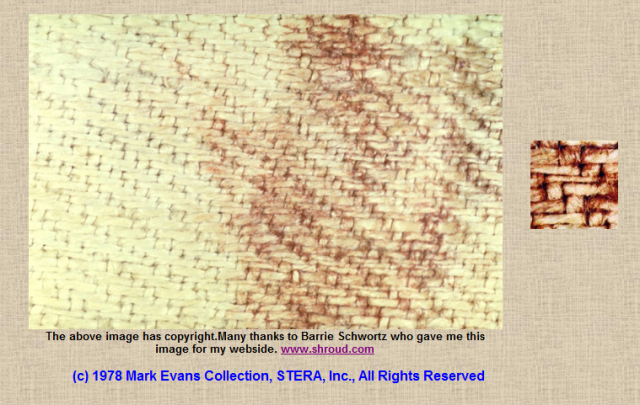 One needs to know which of the latter are contributing to the herringbone weave, and which are not, and the only way of doing that reliably is to zoom in and zoom out  on a single image with an unbroken continuum until one has a feel for the transition between photomacrograph and photomicrograph respectively.

(Note added 14 April 2013: when I wrote this last July, I had not appreciated that the ribs of the herringbone weave ARE discernible in the above picture. They are the stacked but staggered horizontals (running diagonally from top left to bottom right) each of which is 1 thread passing over 3, before going under the next, then over the next 3 etc. I’m deliberately avoiding all mention of warp and weft here, given the later controversy as to which is which, and the lack of what one might describe as an unambiguous scientific definition that allows one to be absolutely certain as to which is which without being present at the loom during weaving).

Barrie Schwortz may have the images in his copyright-protected archive, but has stated (my bold) :

“Due to copyright considerations, we cannot provide high resolution digital files without a written licensing agreement. We do not permit our high resolution files to be published on the internet.”

Why not Mr.Schwortz?  Correct me if I’m mistaken, but I thought your  STERA existed to promote Education and Research…

It might be more accurate to describe STERA as a copyright organization that exists to promote STERA, as this link should prove beyond any shadow of doubt.  (Why should STERA hold the copyright on the iconic Shroud photographs taken by Secondo Pia – to take just one example from a long long  list).

Update 13th April 2013 : we now have the Shroud 2.0 App with higher resolutions than we have seen previously, at least for those with access to a smartphone.

I’ve been playing around a bit with the image that appeared on the Daniel R.Porter’s shroud.com site, showing a close-up of the epsilon (reversed 3) bloodstain on the forehead.

Here’s the image as shown, with the blood just visible on the 1-over-3 threads comprising the ribs of the herringbone weave (quite how much is in those furrows is anyone’s guess, but I suspect it is smaller than one would think at first sight) 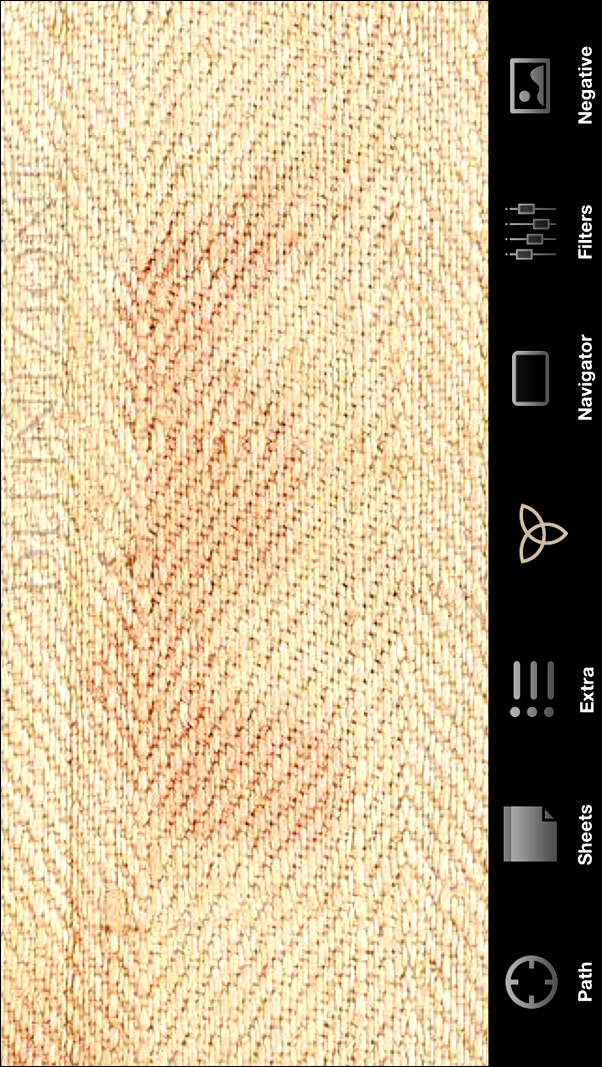 The same, after raising contrast to 33/100 in MS Office

Note that the pink colour has intensified somewhat on the 1-over-3 threads, and there is a hint of a more intense yellow in places outside the blood stain corresponding with faint patches of body image. 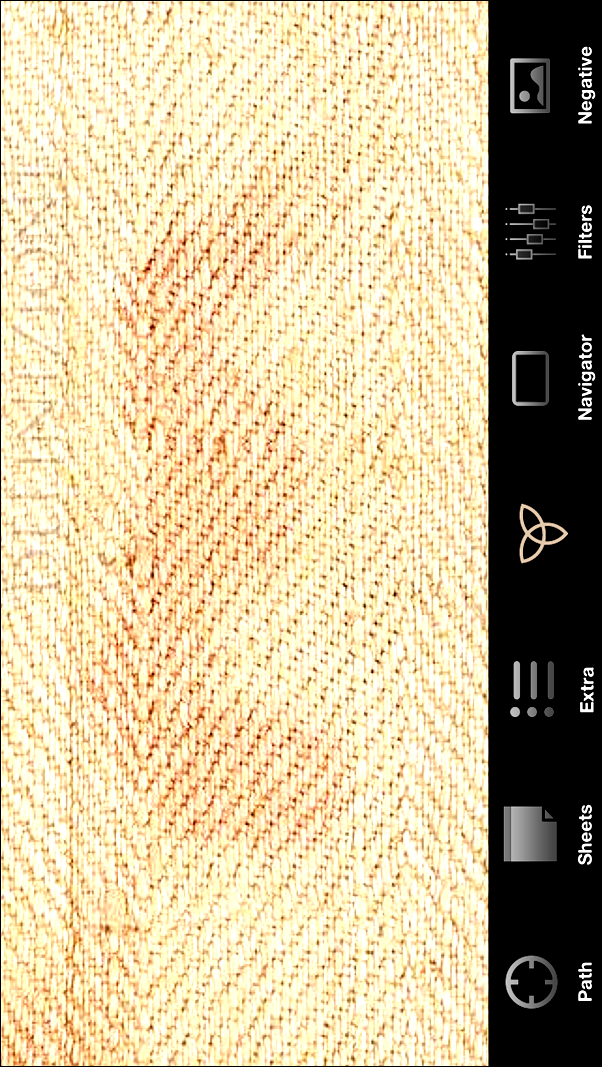 Note further yellowing /intensification of the body image colour, but the yellow is now replacing pink in the bloodstain too.

Note how the initial pink coloration of the threads in the epsilon has now been replaced by the yellow coloration of body image at high contrast. Artefact? Or is there body image under the epsilon bloodstains that has been unmasked by increasing the contrast?  More to follow (control experiments).

Futher update: here, in response to an enquiry, is the frontal and reverse side of some fabric that has been dabbed with blood.

Late addition (July 1 2013): herringbone weave modelled using a suggestion from Hugh Farey on the James Randi Forum (more details to follow). I chose this old post as one having the greatest relevance to the matter of that (enigmatic) herringbone weave.

Underside – the purple strip is still the crown thread, as per topside, but now accounts for 25% of the total (cf 75% on top side)

6 Responses to Why there is a pressing need for higher definition Shroud images to be placed in the public domain (Barrie Schwortz’s STERA please note).