Shroud Scope 9: how simple photo-editing may help resolve controversial issues regarding the blood and body images

I shall start by posting an image that I obtained yesterday. I think, I hope, that at  least some visitors to my site agree that it is a unique picture for the light it throws on the blood versus body images on the Man in the Shroud, concentrating today on the face. Having been told I am wasting my time using Shroud Scope for this purpose, that tests with proteolytic enzymes have shown conclusively that blood is under image (did I ever say otherwise? It is the “conclusively” bit with which this long-in-the-tooth retired biochemist takes issue), that blood is in furrows as well as ribs, then I need all the moral support I can get at the moment.

So I am displaying my “best picture” straight away, to share it with others.  I will then say how it was obtained by simple photo-editing enhancement .  As you will see, the latter makes it possible  visually to differentiate between blood and body image in a way that is not possible with Shroud Scope on its default settings..

Here’s the picture that had me exulting, sotto voce of course, not wishing to disturb the neighbours,  “Eureka”. I’ll say why later. For now I’d simply say that it’s all to do with “flaking off” of old blood. As my old  Botany professor once memorably advised us in a microscopy session with his beloved Bryophyta  – ” Home in on  the damaged bits first if you want to discern organization and fine structure…” 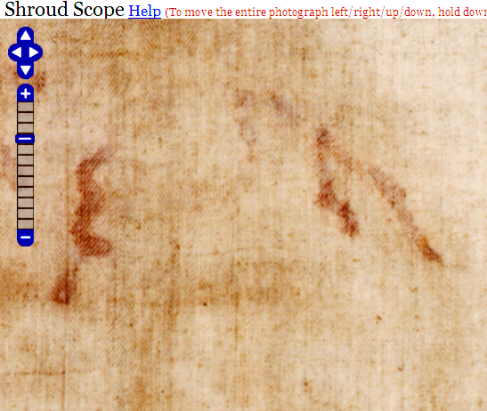 I have this saved as “epsilon, wishbone, -33,100.43”. The latter are settings in my brightness/contrast/mid range tone settings. The next picture will show what one sees on the Shroud Scope default settings, i.e. (0,0,0). 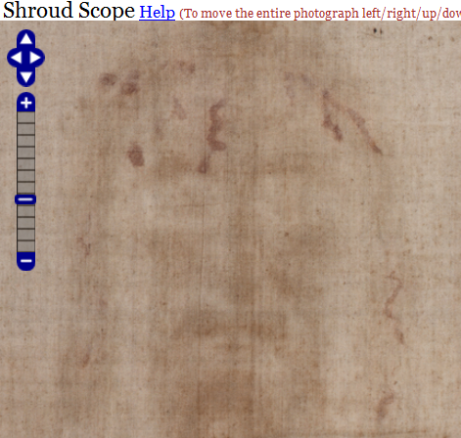 Here is what ones sees in the Shroud Scope default settings, which I have labelled (0,0,0) in my file name, to corresponding with the brightness/contrast/mid range tone values in my photoediting programme.

And here’s how that first picture looks on my screen in the photoediting programme (MS Picture Manager) that I used to produce that enhancement, relative to default Shroud Scope settings.

Screen grab of what I see using MS Picture Manager. Nore the three key settings on the right – brightness/contrast/mid-range tones.

Whenever I hit on a good result now, I make a habit of saving those three key values as a tag on the file name, separated by commas.

I shall add a few words now about how these optimised settings were arrived at, but first I shall hit the Publish key on what I’ve said so far. DONE.

As seen earlier, the default image is essentially monochrome, albeit  washed-out shades of plum rather than B&W. Here’s what I call the epsilon/wishbone bloodstains in default settings: 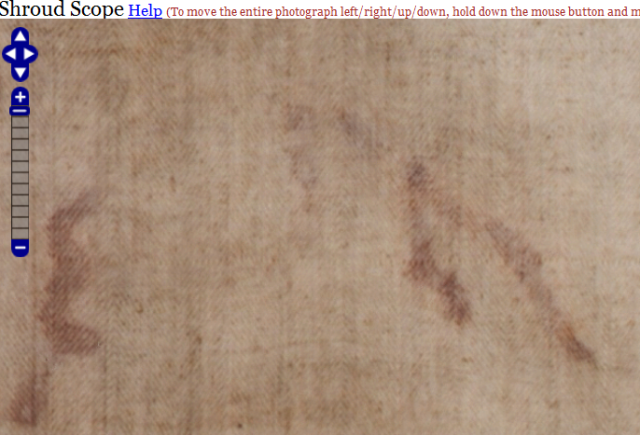 If all one had was this image, one could be forgiven that blood and body  were one and the same in their image characteristics. Something had to be done.  The first step was to play with the brightness control. While turning it down made for a darker picture (obviously), something interesting and unexpected happened. A colour differentiation appeared between blood and body image. 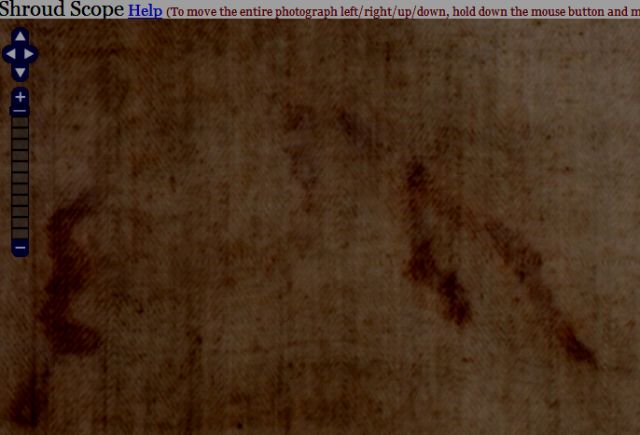 The next step was to increase the contrast (routinely to maximum 100, that generally being best from experience), and then fine-tuning the brightness for best differentiation and overall luminosity and ‘impact’).

Increase contrast to maximum value, then re-adjust brightness to get this, -7,100,0

Finally, tweaking the mid range tone value, here below from 0  to 15, can help enhance the body image, which can be up or down-regulated as a  grey-brown colour (but it is preferable to work in that colour for body image than a more ambiguous yellow or golden-brown for reasons I’ll return to later): 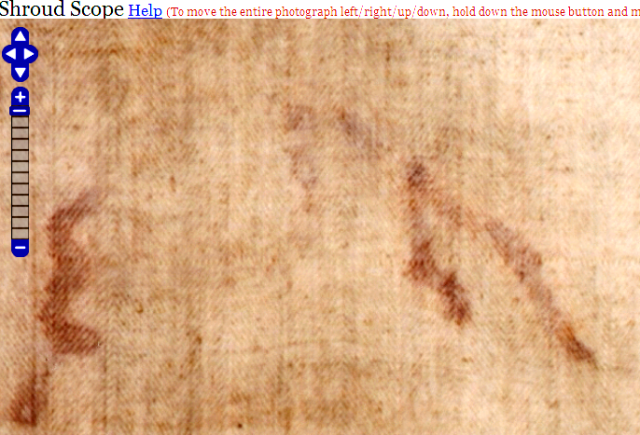 Thinks: who would have thought that colour, and more importantly, colour differentiation, could be enhanced merely by adjusting brightness and contrast?  Given that the colour control – a totally separate control – was not used, and indeed I have no intention to use – then what you see above, while enhanced, and perhaps exaggerated in terms of tone, hue, saturation etc, is not false colour, in the sense that remote sensing satellite data are often presented with false colour.

What interests me know are the gaps in the blood image. Why are they there. Flaking off of blood? What is underneath any putative flaked-off regions? Is it still blood-derived, albeit fainter? Or is there evidence for body image underneath those putative flaked-off areas? The Shroud Scope, allied with simple contrast/brightness adjustment, can be  useful  I maintain in addressing some of the controversial and unresolved issues regarding the Shroud – with the crucial advantage that one is using existing data, and thus not compromising the physical integrity of the Shroud any more than it has been already.

UPDATE:  here’s a close-up of part of the picture where it seems that body image (hair) intersects with a pale region that, from the general blood ‘footprint’, once had a thicker layer of blood – in other words a candidate “intersect” region for deciding what was there first – blood or body image.

Possible overlap (or “underlap”) of blood and body image (most but not all blood image having flaked off?)

It’s probably premature even to make tentative interpretations at this stage, until one has built up an archive of such instances of intersections. Suffice it to say that I can envisage a scenario that might have produced those diagonal ribs with grey-brown body image appearing on top of a faint pinkish-purple part of the bloodstain. One just has to hope it is not one of those regions that were stripped of their image coatings by one or other STURP investigator. (In fact, one could be forgiven for thinking there was still some adhesive tape in that last image!).

Update: 26 March 2014  Here’s the effect on the Shroud Scope face (Durante 2002) of applying the same changes step-by-step. Have I taken any liberties?